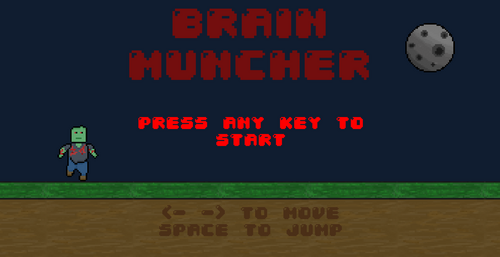 I’ll set the scene. It’s Tuesday 26th October and I find out a small game jam begins in 24 hours. I haven’t touched game dev since pre pandemic but can feel my hunger slowly returning. I enter the jam planning to utilise the entire allowed 7 days to my full advantage.

Flash forward one week and it’s now 8pm Tuesday and I still haven’t started my game. Catching a cold delayed me starting which was followed by a weekend of Halloween drinking at university. Monday, I nursed the hangover. Now it’s Tuesday and I don’t have an excuse to not start my project as my lectures finished at 3pm yet I still haven’t started at 8pm. I couldn’t procrastinate anymore as I literally had nothing to procrastinate with. I sat down at my desk knowing I was in for an all nighter of panic, worry and regret for not starting earlier.

Tuesday morning, I was stacking shelves at Iceland and realised I was definitely not going to have time to make the top down zombie shooter I originally planned. As I stood alone in the back fridge, I pull out my phone to search for simple game ideas. I hadn’t used Unity for over 18 months and knew I was going to be rusty. Due to shitty 4G provided by voxi (fuck you voxi) I couldn’t search and the google lost connection dinosaur game appeared on my chrome app. Turns out my shitty connection gave me the idea of making a Halloween themed infinite runner (thank you voxi).

I’m very aware how lazy of a decision this is but admittedly I just needed a simple project to help get me back into the swing of things. It’s not what I want to continue doing in any future jams but if it helps me improve my shitty game dev skills then I see that as an absolute positive.

I quickly draw up the assets as I think this will help inspire me to keep working through the night. Once I’m happy with my zombie animations I make the gravestone obstacle, brain collectibles and ground textures. I then lay out my ground textures and begin working on making the zombie move and jump. Next, I created the grave and brain game objects to kill the player and increase the score respectively. Then I added a spawner for them to instantiate at random intervals. The core features of the game all worked perfectly and I caught some second wind after finishing this step.

Sound was needed next and searching online for a sound effect and a royalty free theme that had a darker tone was a pain in the arse cause every website expects you to sign up or pay. No.

Next I needed polish and after adding in a moon I drew in gimp - haven’t downloaded a cracked version of photoshop yet - I became stuck on why my player was jumping behind the moon. This took me 30 minutes at 2 am to figure out I just had put it in a higher layer than every other piece. This was very infuriating to discover but taught me to sort layers properly next time.

Noticing the tiredness starting to kick in I decided to move onto final polish. I made the game gradually get harder and faster as the player ate more brains, added a title screen, and allowed the player to restart the game after the zombie dies. Lastly, I made as many minor bug fixes as I could and seeing the clock approaching 4 am I called it a night. About an hour and a half of sleep before starting a gruelling 6 am Iceland shift. 100% worth it to actually complete my first game jam.

Overall, this was an extremely positive experience and I couldn’t be happier to have actually submitted something even though it is buggy. There’s lots of improvements I would have wanted to make but after 8 hours straight I needed some sleep. I had forgotten almost everything I had learned prior to covid but this is at the very least a step in the right direction to getting me back into indie development. The project is far from perfect but I’m proud of it regardless.

pro tip, don't wait till the last day to start a game jam